Crystal-clear images, top-quality surround sound, 3D films, viewers up close to the action – those are the prospects offered by the cinema of the future. Its forerunners are 3D and Imax cinemas, which continue to use analogue film technology but project high-quality images onto curved projection surfaces, giving viewers the impression of being in the middle of the action. But the thrills the technology offers come at a price. Such cinemas require special projectors weighing several tons. Complex and expensive technologies are needed for filming and projection, which is why the films are generally short and few in number and why ”dome cinemas” are still quite a rarity. The only place where full digital dome projection has so far really caught on is in planetariums, and in recent years a variety of technologies have become available for this purpose.

VISCOM has developed a new solution for digital dome projection in close cooperation with Carl Zeiss. It allows digital images and videos to be displayed on a concave hemisphere using standard projectors and commercially available PCs – without loss of quality even in the case of high-resolution images. Image distortion correction, crossfading and the synchronization of the different components on the dome are done in real time.

Today, showing digital films on curved projection surfaces involves a lot of preliminary work. Before projection commences, the individual scenes are put together on the computer using a video-editing program, and the entire video is computed. During this process, the partial images are distorted to adapt them to the curved projection surface and make them produce a realistic overall image on it. But a film remains correctly adjusted with respect to the screen only until there is a change in the position of the projector or the structure of the projection screen. Then complicated adjustments are required – or the video has to be recomputed to meet the changed conditions.

VISCOM´s newly developed digital dome projection technology uses a so-called autocalibrating display that perform the image distortion correction in real time as the technical conditions in the dome change, thus making the above mentioned adjustments superfluous. Here, a camera and calibration images are used to fine-tune the images to the projection surface. This enables even the tiniest inaccuracies in the distortion correction process to rectified online.

In principle, the size of the dome which VISCOM´s digital system uses for projection is arbitrarily scalable. The hardware consists of seven commercially available PCs and six standard projectors. These produce six partial images, five on the periphery and one image in the middle of the dome. The image distortion correction is performed in real time by the autocalibrating software developed by VISCOM. This software also ensures seamless image blending, i.e. that the partial images are perfectly aligned without any visible seams. A dome video of this kind has a maximum possible resolution of 4000 × 4000 pixel and more, which is better than the 2048 × 4096 pixel offered by digital cinema. The projectors are controlled by a PC cluster consisting of a server and six graphics clients. The server not only performs the control, distribution and scene-synchronization functions, it also takes care of system calibration, geometry recognition and parameter setting for the geometry distortion. The actual image predistortion is done for each projected image on the clients in real time. A distributed show player, running in parallel on all computers, is available for generating and playing content. Like a video-editing program, it allows the integration of different components such as graphics, texts, movies and audio – but without the need for the complicated generation of a high-resolution video, such as is required when using a video-editing program. The show player directly synchronizes and plays the various components, making it unnecessary to compute the whole video before projection. Application Areas The digital dome projection technology can be used whenever the aim is to put viewers in the middle of the action or give them a panoramic view of the objects rendered. The player and autocalibration technology can be used with all different shapes of projection surfaces and combinations of projectors. The technology is suitable for deployment not only in digital cinemas and product presentations but also in planetariums. 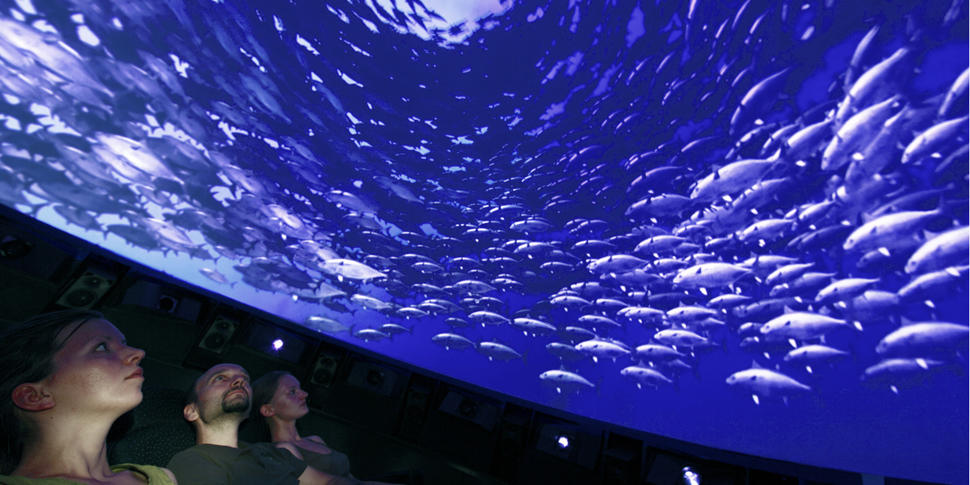