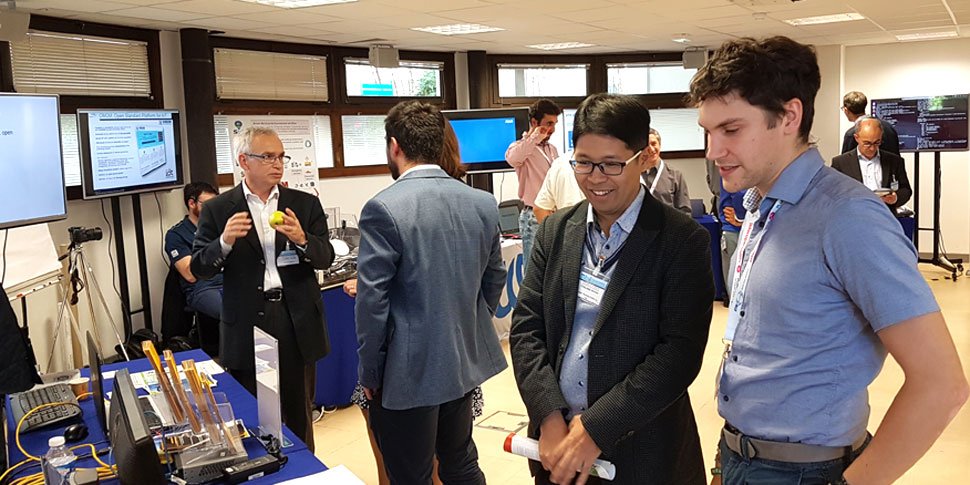 Demo of the IoT testware at the ETSI IoT Week 2017

In times of globalization and networking, the Internet of Things (IoT) plays an increasingly important role. Cisco Systems predicts about 50 billion connected devices worldwide until 2020. In the near future, nearly everything will be connected with the internet. From October 23-26, the ETSI IoT Week 2017 took place in Sophia Antipolis, France.

Topics discussed included updated versions regarding communication technologies like oneM2M, but especially questions about IoT security and privacy were addressed. In addition, research activities and results had been presented. In this context, Sascha Kretzschmann and Axel Rennoch demonstrated together with the European project ARMOUR the IoT-Testware which is available at the Eclipse Foundation and co-developed within the IoT-T project. Together with Ericsson, researchers of FOKUS also presented the IoT-testware in more detail within a workshop talk. The new ETSI working group “Testing” (TST) of the Technical Working Group “Methods for Testing and Specifications” (MTS) was also explained. The first topics of the TST Group include the development of studies, recommendations, test catalogs and specifications for the following areas:

The visibility and positive feedback from the industry regarding the importance of developing the IoT-Testware, as well as the response to the emergence of the TST group, confirms the project team's strategy to begin coordinated activity with the Eclipse Foundation and ETSI at the same time.