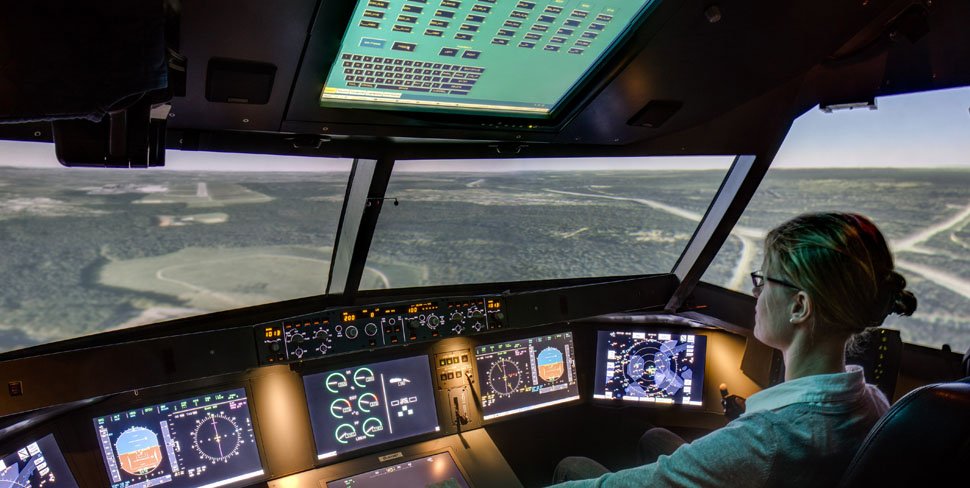 Flight simulator at the Institute of Flight Guidance for research on human factors. DLR

DLR, Germany’s national aeronautics and space research centre, has just had its cockpit simulator within The Institute of Flight Guidance upgraded by Virtalis. Therefore they used the auto-alignment technology from Fraunhofer FOKUS. DLR has approximately 7,400 employees, with 16 bases in Germany, as well as offices in Brussels, Paris, Tokyo and Washington D.C.

Virtalis, one of the world’s leading Virtual Reality companies, installed three Projection Design F35 WQXGA (2560 x 1600 pixels) projectors which project virtual exterior views on a mirror system with a 6-meter diameter part of a sphere. This collimated visual system allows an area of 180° by 40° to be displayed, giving a realistic depth perception. Virtalis chose the projector auto-alignment technology from the Fraunhofer Institute FOKUS to cope with the complicated blending and warping required by the simulator.

The helicopter and fixed wing simulator, which had previously used analogue projectors with manual calibration, is used by both military and civil pilots. DLR researchers carry out human factors analyses to evaluate new assistance systems such as helmet mounted displays (HMDs). Currently, the team is looking at the performance of an HMD with an ultra-wide field of view (80°x40°) and a resolution of 2250×1200 pixels. The projected view outside the simulator can even be altered to simulate brownout and whiteout conditions, leaving the pilots dependent on the augmented reality HMD.

Dr. Helmut H. Többen, business manager within the Institute of Flight Guidance at DLR, explained: “For research like ours to be successful, we need to mimic the real world as closely as possible, because it is crucial that the pilots are able to ascertain the relativity of objects to each other. Since our upgrade, not only has our system become easier to operate, but the resolution and brightness have more than doubled. The installation, featuring teams from Virtalis and Fraunhofer, was perfect and took just four days”.

As well as the three projectors, DLR’s simulator now boasts an auto-calibration camera, so that the projectors can be calibrated daily before the research team arrives. The projectors display a series of stripe patterns, akin to a barcode and the camera records them. The Fraunhofer auto-alignment system then analyses the stripes and corrects any distortions and misalignments in the projection. At the same time, it corrects the brightness so there are no gaps or areas where it is too bright, owing to projector overlap or the screen shape. The result is one seamless image on the simulator’s display.Manuel Schiewe, Business Developer of Media Technology at the Visual Computing (VISCOM) department of the Fraunhofer Institute FOKUS, commented: “DLR’s simulator also used our Configurator software which helps in the planning and configuration of the whole multi-projection setup. In addition, as DLR has two rendering engines, so we were able to deploy both our Desktop Warping technology, which warps and blends arbitrary Windows applications within the graphics card’s driver, and our Integration Variant, which combines our SDK files to enable warping and blending within DLR’s own visualisation renderer”.