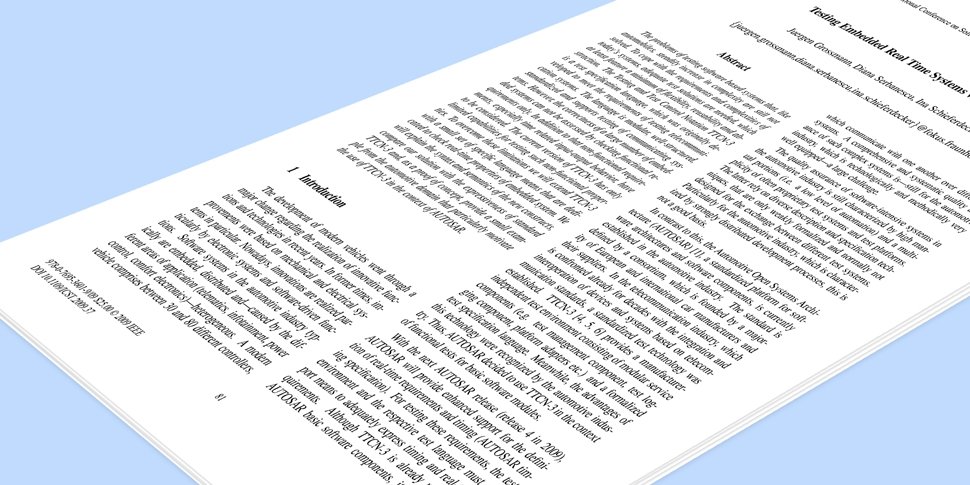 The cover page of the awarded paper Fraunhofer FOKUS

The paper “Testing Embedded Real Time Systems with TTCN-3” by the former FOKUS scientists Dr. Jürgen Großmann, Dr. Diana Serbanescu (now TU Berlin) and Prof. Dr.-Ing. Ina Schieferdecker (additionally to her duties at FOKUS at TU Berlin) has been awarded the Most Influential Paper Award in the category practical impact at the 12th IEEE International Conference in Software Testing, Verification and Validation (ICST). The prize will be presented during this year’s conference which takes place from April 22 to 27 in Xian, China.

Testing complex, software-based systems is an important aspect in an increasingly interconnected world. The further development of TTCN-3 (Testing and Test Control Notation) presented by FOKUS scientists allows flexible and domain-specific testing of time-critical systems. Since the extension was presented at ICST 2009 by Dr. Jürgen Großmann, Prof. Dr.-Ing. Ina Schieferdecker and Dr. Diana Serbanescu, it has been officially included in the TTCN-3 standard and has proven itself in the context of industrial applications.

During the annual conference, the ICST looks back and evaluates the paper with the greatest impact of the last ten years, this year the work of the three researchers has been groundbreaking. The FOKUS scientists expect that TTCN-3 will continue to play a pioneering role as an industrial test technology for automated test solutions for modern, communication-based devices, applications and services.