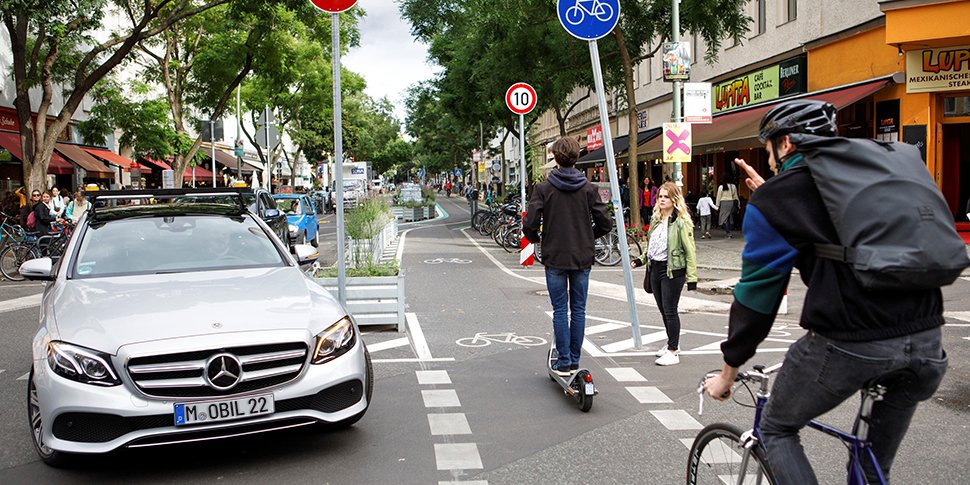 There are times in traffic situations when cyclists are difficult to detect even for the most advanced vehicle sensors - for example, when they are obscured for a few seconds by a stopping bus. In the project Reallabor Hamburg Fraunhofer FOKUS used its Eclipse MOSAIC simulation framework to demonstrate that uninterrupted object detection can be achieved by fusing LIDAR data from multiple automated cars, thus providing even better protection for particularly vulnerable road users in the future.

In contrast to people in cars, buses or trucks, people traveling by bike, on foot or e-scooters are less protected in the event of a collision. For this reason, Fraunhofer FOKUS has been working over the past 1.5 years with industry partners in the project Reallabor Hamburg to develop and evaluate technologies and applications for better digital integration and thus for better protection of the so-called “Vulnerable Road Users” (VRU).

Automated cars are already able to precisely locate themselves and other automated vehicles thanks to their various sensors, but of all on the street VRU are left out in the cold. Therefore, one focus of the FOKUS research team was developing a highly accurate localization of VRUs. GPS data from the VRU's smartphones was used for this purpose, which is compared with digital maps. The data is stored and analyzed in a local cloud – Mobile Edge Cloud, or MEC for short. This location-as-a-service (LaaS) can be integrated into collision warning apps, for example, to improve their reliability.

The team also demonstrated in a simulation that fusion of LIDAR data from neighboring cars traveling within approximately 100 m avoids blind spots in the object perception of these vehicles, ensuring that VRUs are detected in traffic without interruptions. As with LaaS, the fusion is also performed in the MEC.

For this purpose, the researchers from the Smart Mobility business unit simulated a potentially dangerous traffic situation at Sievekingplatz near the Hamburg Trade Fair with three highly automated cars, a bus that is currently stopping at a station, a bike path that runs right past the bus stop, and a person riding a bike. For this, they coupled simulators with their open-source simulation framework Eclipse MOSAIC for the road users, the communication, and the application, in this case the LIDAR data fusion in the MEC. The detailed vehicle simulator Phabmacs developed by FOKUS was integrated for the movements of the road users and the LIDAR sensor technology.

The simulation was choreographed in such a way that one of the three vehicles cannot perceive the person on the bicycle for two seconds, even in the safety-relevant close range, because the person is obscured by the bus. During the simulation, each vehicle's regularly recorded LIDAR point clouds were communicated to the MEC server for processing. This improved subsequent object detection so that all three vehicles were able to perceive the person on the bicycle at all times. Typically, automated cars use only their own sensor data for object detection. The simulation showed that an optimal result is achieved when the LIDAR data is integrated prior, rather than fusing the bounding boxes that indicate object detection later. The team also found improved perception is even obtained when the most accurate detection of a cyclist from one car is shared between cars in the vicinity.

In addition to the blind spot assistant, drivers could thus be warned of obscured VRU in the future and accidents avoided.

The Reallabor Hamburg project was completed at the end of 2021 after 1.5 years. It was funded by the German Federal Ministry of Transport and Digital Infrastructure (BMVI) with around 20.5 million euros. A total of 11 subprojects demonstrated which digital mobility solutions can prove themselves under actual conditions and offer people real added value.