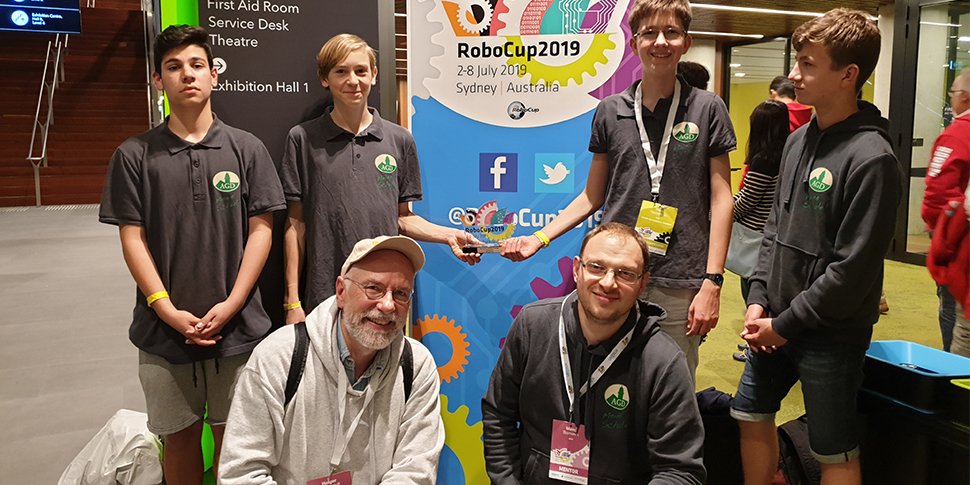 The International Robotics World Championship “RoboCup 2019” took place in Sydney from the 2nd to 8th of July this year. Under the direction of the FOKUS researcher Prof. Dr. Holger Schlingloff from our “System Quality Center“ (SQC) business unit, the junior team “.exe” was able to snag the third place in the “Rescue Simulation” discipline.

In the competition, the task for the competing teams was to collect objects with simulated robots in a virtual environment and bring them to special unloading zones. The biggest challenge was navigating a largely unknown arena with walls, obstacles, traps, signal blocking zones and marshland. The robots were programmed in C, with the programs being executed in a special runtime environment with a cycle time of 60 milliseconds.

At the Robotics World Championship, the best teams from 16 nations competed against each other. After our four high school students Felix, Theo, Jakob and Samuel came in first during the group stage of the tournament, they lost in a nerve-wracking final round against the eventual vice-world champion from Singapore – then won confidently during the third place match against the team from Slovakia. In the subsequent Superteam Challenge, they only had to admit defeat to the world champion from Japan and thus became the Superteam vice-world champion. We congratulate the entire team on their success.