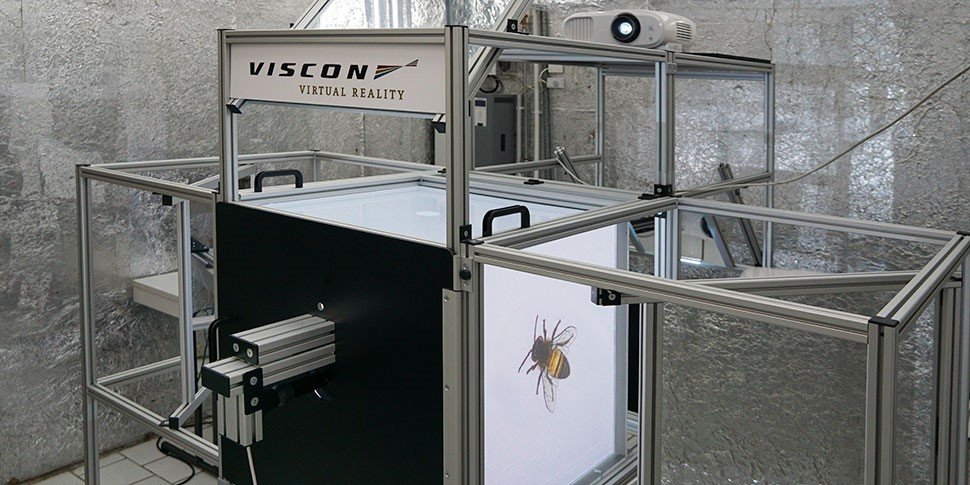 For research purposes of the State Institute for Apiculture in Hohen Neuendorf, VISCON GmbH has developed a five-wall simulation environment for bees together with the Visual Computing and Analytics business unit (VISCOM) of Fraunhofer FOKUS.

In order to better analyze and research the behavior of bees, the State Institute of Apiculture recently acquired an optical simulator for behavioral experiments on insects. In this five-sided simulator, called “BienenCAVE”, immersive worlds of experience for bees are projected. For example, projections from different perspectives can create an impression for a bee that other bees are circling around it. In addition, natural environments such as trees, meadow landscapes, and other living environments can be simulated.

Bee researchers can change the shape, position, and size of various projection objects. The transfer to the illuminated surface is so realistic that the movement of the objects from the perspective of the insect creates a lifelike impression and the bee behaves almost naturally within the BienenCAVE. The simulation environment enables bee researchers to study and understand the mating behavior of the male bee with the queen, and other behaviors at close range.

The software for animating moving objects on the all-round screen was adapted by the FOKUS researchers to the special requirements of the BienenCAVE. The 360° projection software of FOKUS is used at other locations, for example in planetariums and domed cinemas. Within the scope of this project, VISCON GmbH designed and set up the entire hardware: projectors, deflecting mirrors, the scaffolding, and frame for the CAVE, the cubic projection surfaces, and the computer architecture.

The BienenCAVE is in use at the research site in Hohen Neuendorf. In connection with research and breeding work, the State Institute for Apiculture keeps about 300 bee colonies. The institute is funded by the federal states of Berlin, Brandenburg, Saxony, Saxony-Anhalt, and Thuringia. The members of the association consist of the representatives of the participating states as well as representatives of the beekeeper associations and research.