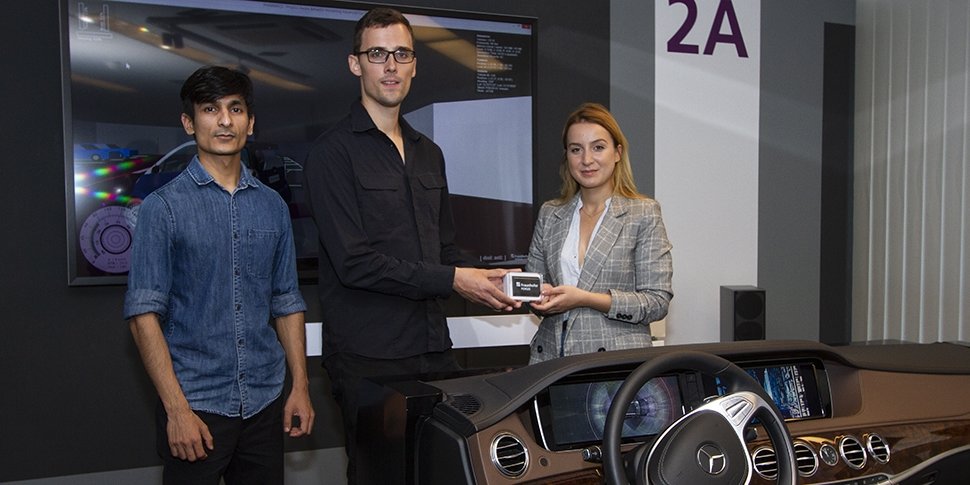 A prize is awarded to the student with the best test drive result. The runner-up is also been honored by FOKUS researcher Daniel Becker at the award ceremony. Fraunhofer FOKUS

As part of the iKoPA project, Fraunhofer FOKUS is developing an interactive simulator for the virtual testing of automated driving and for the analysis of user acceptance. To this end, various driving scenarios were created in which students of the TU Berlin had to monitor the system behavior and intervene in difficult situations. The student with the best test drive result was awarded a prize.

In order for research and development of fully automated vehicles to continue in Germany, the acceptance of potential users of automated vehicles is crucial. As part of the iKoPA research initiative, a simulator for the virtual testing of automated driving is being developed with which users can experience various driving scenarios in a realistic car cockpit. As in a real automated vehicle, the steering wheel turns on its own in the simulator, while the user sees a virtual journey through a 3D world, projected onto a large screen. Various driving scenarios can be simulated, such as an undisturbed drive without other road users under ideal conditions. However, it is also possible to simulate complex traffic situations in which user intervention is necessary to prevent a collision with sudden obstacles. In addition, system errors such as unexpected rapid increases in speed, close driving due to sensor inaccuracies or hacker attacks can also be simulated.

Students of the TU Berlin conducted both trouble-free and complex test drives in a test and were then asked about their subjective perception of the test drive. For the analysis of the sensations, the participants were asked to verbalize all impressions and sensations during the ride, so that they could be evaluated in detail after the test, as their rides were also recorded on video. In order to promote motivation and concentration during the test, a score was calculated as a playful element for the participants. Points were awarded for reaching the goal quickly, but points were deducted for intervening in the system, e.g. by holding the steering wheel or applying the brake, or for a collision that occurred. The best result was achieved by a student who was awarded a prize.

“The evaluation shows that users have a great interest in automated driving, but are also skeptical about this topic,” summarizes Dr. Ilja Radusch, director of the business unit Smart Mobility. “Particularly in highly dynamic traffic situations, there is still uncertainty as to whether the vehicle can react reliably to unforeseen events. For this reason, the vehicle should present the decision-making process to the user in an understandable way via a descriptive user interface. In addition, automated vehicles should initially be used in less complex scenarios, such as on motorways or in underground car parks, so that users can develop confidence in this new technology over time”.

The iKoPA project is funded by the German Federal Ministry of Education and Research (BMBF) and is scheduled until November 2018. In addition to Fraunhofer FOKUS, the participants include Bayerische Medien Technik (bmt) GmbH, the Fraunhofer Institute for Secure Information Technology (SIT), the Daimler Center for Automotive Information Technology Innovations (DCAITI) at the Technical University of Berlin, the Saarland University of Applied Sciences (htw saar), SWARCO Traffic Systems GmbH, NXP Semiconductors Germany GmbH and the independent State Center for Data Protection Schleswig-Holstein (ULD).