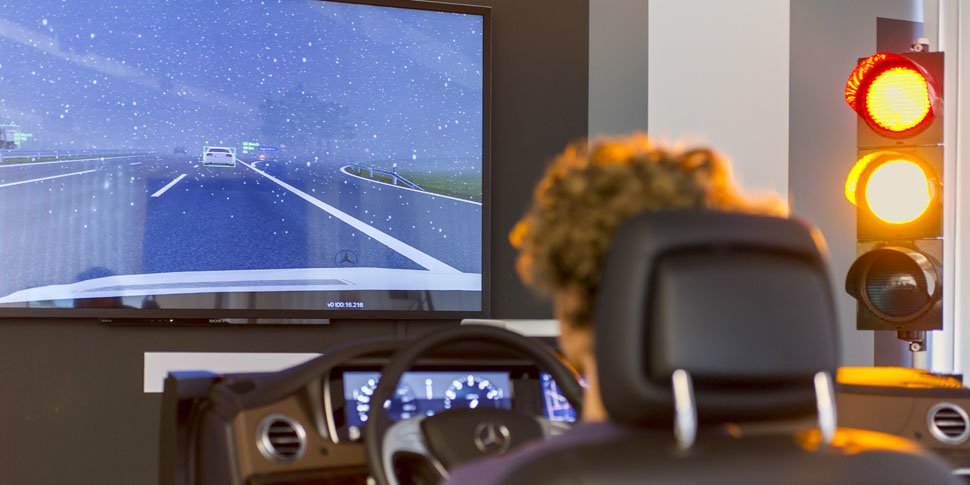 Highly automated driving even in snow or rain: Robust awareness thanks to intelligent mix of sensors

Press Release – Poor visibility in rain or snowfall is a big challenge for people and highly automated vehicles. In the European project RobustSENSE, over the past two years, researchers from the Fraunhofer FOKUS along with 14 partners, among others the Daimler AG and Robert Bosch GmbH, developed a software platform on which various sensor data from cameras, laser, radar and further information like weather data can be combined. The aim was to ensure a robust and reliable understanding of the road situation, independent from the complexity and the visibility. Following the virtual testing of the system, field trials began among others on the Berlin test site for highly automated driving.

Heavy snowfall, a ball rolls onto the road: Even a human driver can have difficulties to recognize quickly enough if this is a dangerous object or not. For a highly automated vehicle, this poses an even greater challenge.

The researchers of the business unit Smart Mobility at the Fraunhofer FOKUS have for many years been engaged in highly automated and connected driving. For the past few months, they have been active on the test sites in the Berlin urban traffic on test drives. Now, in the European project RobustSENSE, along with 14 other partners, they have developed and virtually tested a software platform with which highly automated vehicles are aware of the environment independent of the weather and the complexity of the traffic and can react accordingly. For example, in snowing conditions, the driving maneuvers can be adapted such that the vehicle does not follow the path of the internal highly accurate HD-Map, but along the road that has been cleared of snow.

In order to robustly understand their environment, assistance systems and vehicles require highly accurate HD-Maps, but above all, optical sensor components, which are already being installed in various forms. Cameras support vehicles in maintaining their lane while driving on the highway. They register even small obstacles, and in highly automated vehicles, they initiate the braking process if required. However, especially the cameras are susceptible to faults in registering and recognizing of objects: strong backlight from the sun or harsh weather conditions like rain or snowfall can cause obstacles, other vehicles or persons may be recognized too late or not at all by the system. In order to overcome this, the researchers combine sensor data from camera with positioning from laser and radar systems. Thereby, the researchers can ensure a robust and reliable awareness as well as driving maneuvers adaptable to all weather conditions. For the virtual testing, the simulation environment VSimRTI from Fraunhofer FOKUS was used. The system will now undergo field trials during autumn and winter in various European cities and highways amongst others in the center of Berlin.