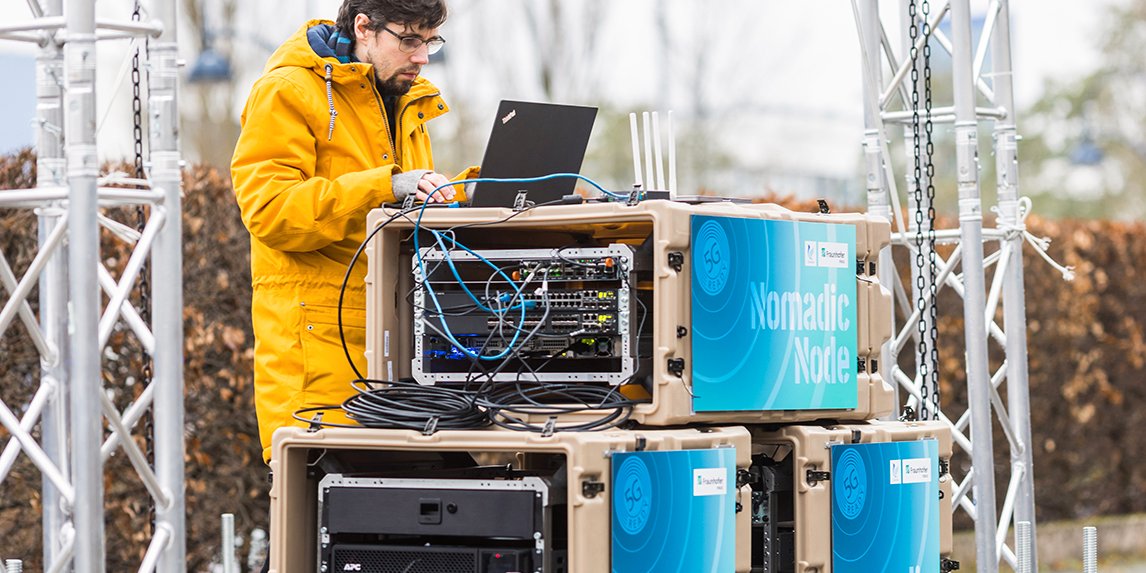 When it comes to activities such as fighting forest fires, monitoring construction sites or providing multimedia services at sports and other mass events, a reliable, secure 5G campus network is often needed locally and temporarily to ensure maximum network coverage on the entire site. Thanks to the 5G+ Nomadic Node from the Fraunhofer Institute FOKUS, this kind of non-public, temporary network can be set up at short notice in order, for instance, to connect emergency forces with each other or control firefighting robots remotely. The entire hardware and software fits into a couple of mobile server rack containers. The operation of the adapted 5G mobile network with a satellite connection will be presented at the Hannover Messe 2022 from May 30 to June 2 at the joint Fraunhofer booth in Hall 5, Booth A06.

Forest fires do not only cause catastrophic damage in southern countries, Germany is also affected. One third of all forest fires in Germany occur in the federal state of Brandenburg. This state, with its extensive pine forests, low precipitation and light sandy soils, presents the highest forest fire risk in Germany. It suffers several hundred fires a year. When fighting fires, the police and fire department have to investigate, monitor, secure and record the situation in an area of several square kilometers in each case. This is where the ALADIN (Advanced Low Altitude Data Information System) project comes in, which is funded by the German Federal Ministry for Digital and Transport (BMDV). Setting up a mobile 5G campus network is intended to facilitate needs-based 5G networking of emergency forces and resources. The aim is to obtain a real-time picture of the situation regarding the fire by using drones during operations in inaccessible areas, to control fire trucks and connect the emergency forces with each other. This is achieved with the help of the 5G+ Nomadic Node from the Fraunhofer Institute for Open Communication Systems FOKUS.

The Nomadic Node uses the standard-based Open5GCore from Fraunhofer FOKUS, a software-based core network in which the communication control programs run. The Open5GCore makes it possible to set up and make available a 5G network very quickly in Standalone (SA) mode. The full range of functions offered by the mobile communications standard is available to users. This extends beyond the widespread non-standalone solutions that only combine 5G base stations with 4G core networks. The Open5GCore is interoperable with 5G base stations from different vendors and has been used for many years as the test core network for mobile operators and manufacturers all over the world to evaluate new functions for future mobile communications systems and to validate innovative use cases. Thanks to its modular design, the Open5GCore is also suitable for performing various debugging, integration and acceptance tests. In addition, this modular, virtualized core network allows a flexible combination of network functions providing optimized application support on edge clouds. “Private 5G networks combined with edge computing enable us to set up secure, near-real-time communication networks both in an industrial environment, such as factory buildings, and in areas without any communication infrastructure, to which we can add a compact variant of an edge cloud with our Nomadic Node kit,” says Marc Emmelmann, ALADIN Project Manager at Fraunhofer FOKUS.

The entire 5G Nomadic Node kit comprises a couple of rugged, transportable server rack containers providing the hardware and software required to set up a “nomadic”, secure 5G campus network in just a few minutes. “In Brandenburg’s forest areas, the available communication infrastructure is simply not up to controlling unmanned firefighting robots or sending drone videos to the operations center. Firefighters cannot enter the forests for safety reasons, as many areas are still affected by residual ammunition, as well as by unexploded bombs and grenades from the Second World War. Deploying our core network, Open5GCore, enables us to remedy this situation and set up a geographically restricted, flexible, custom-fit 5G network,” says Emmelmann.

The 5G+ Nomadic Node includes a server running Open5GCore and a wireless base band device. The base band device is connected to the core network and processes the data to be transmitted and received digitally. An additional server rack container comprises a battery for providing an uninterruptible power supply or a diesel generator as required. An optional antenna system with a satellite connection also comes as part of the equipment. “In the ALADIN project we need a satellite connection, for instance, to be able to establish a connection with the fire department’s command center, if this is desirable. Depending on the application, our nomadic cell can also be powered via the domestic power grid,” says Emmelmann. A field test will be launched soon in the second quarter of this year at Schönhagen Airport in Brandenburg. The 3.7 GHz spectrum reserved for campus networks will be used for this. Coverage of about one square kilometer is planned.

Back in fall 2019, the research team led by Marc Emmelmann and partners were able to demonstrate in a field test that it is feasible to set up a 5G network onsite for local use at short notice. A 180-degree camera recorded the illuminations on display at the Festival of Lights in Berlin. The testers were then able to receive the video via the temporary network on their smartphones.

The next phase of the researchers’ plan is to expand the Nomadic Node with Open RAN (Radio Access Network) technologies. In the course of the year, it will also be used on mobile construction sites as part of CampusOS, a lighthouse project run by the German Federal Ministry for Economic Affairs and Climate Action (BMWK). “The 5G+ Nomadic Node enables us to install campus networks that can be adapted for temporary needs. This flexibility is achieved through network virtualization. Just like in a modular system, new radio components and software functions can be integrated at an early stage. Campus networks are therefore innovation drivers for new technologies,” remarks Emmelmann by way of conclusion.

At the Hannover Messe, the researchers from Fraunhofer FOKUS will present a 5G+ Nomadic Node kit at the joint Fraunhofer booth in Hall 5, Booth A06.