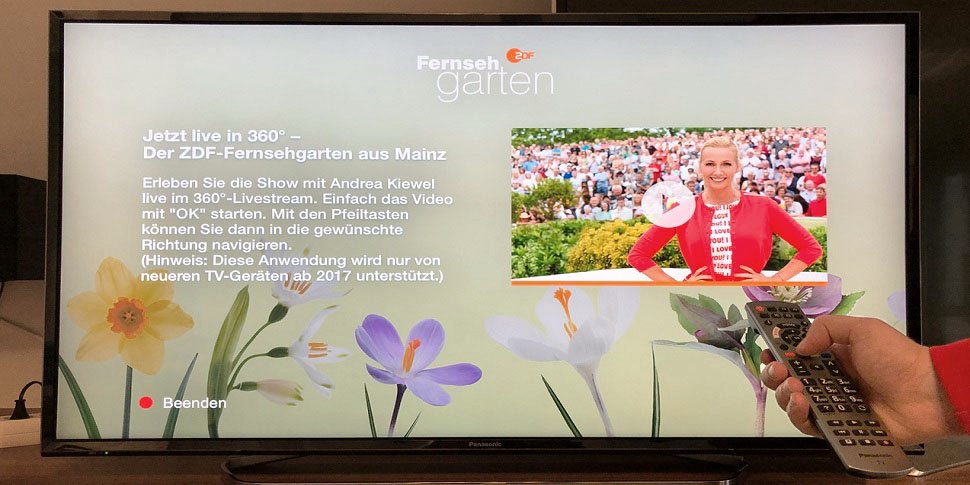 This Sunday, viewers of the German music variety show “ZDF-Fernsehgarten” were able to experience the program as a 360° livestream through the HbbTV on-demand service of public broadcaster ZDF. This complementary experience was provided by using the Fraunhofer FOKUS “Cloud-based 360° Video Playout” technology. The unique and patented solution enables the viewing of high quality 360° videos on nearly any device.

HbbTV Technology is a standard application within all recent TV and Video devices and can be accessed by pressing the red button on the remote control. The “Fernsehgarten” HbbTV App can additionally be accessed via the green button on the remote control, allowing viewers to start the 360° livestream with just one click. After starting the 360° livestream, viewers are then able to choose their individual field of view by using the arrow buttons. Viewers are able to experience the stage performances up close and from their own perspective, turning it into an extraordinary and modern way of watching TV.

Those who want to experience the 360° live stream of the Fernsehgarten not via the television but, for example, via the browser on their computer, can access it via the related ZDF website.

The “Cloud-based 360° Video Playout” for HbbTV, developed by Fraunhofer FOKUS, enables the experience of 360° videos on TV screens as well as any other web-enabled video playback device. The content of the 360° video is processed in a cloud-based infrastructure, but only the individual field of view is transmitted as a “normal” video to the terminal device.

The FOKUS Cloud-based 360° Video Playout technology offers a wide range of new possibilities. Usually, 360° video needs a large bitrate and a considerable processing load to perform the geometrical view projection and rendering. This is why a smooth playback of 360° video is almost impossible on TV sets and low-capability streaming devices. Therefore, Fraunhofer FOKUS developed a new approach: the technology reduces the bandwidth requirement by around 85 percent – without any loss in quality. The key is cloud-based preprocessing: the individual fields of view are rendered at server-side, only the selected view is then streamed to the TV. This reduces the bitrate dramatically and viewers are able to enjoy the program up close and in high definition.