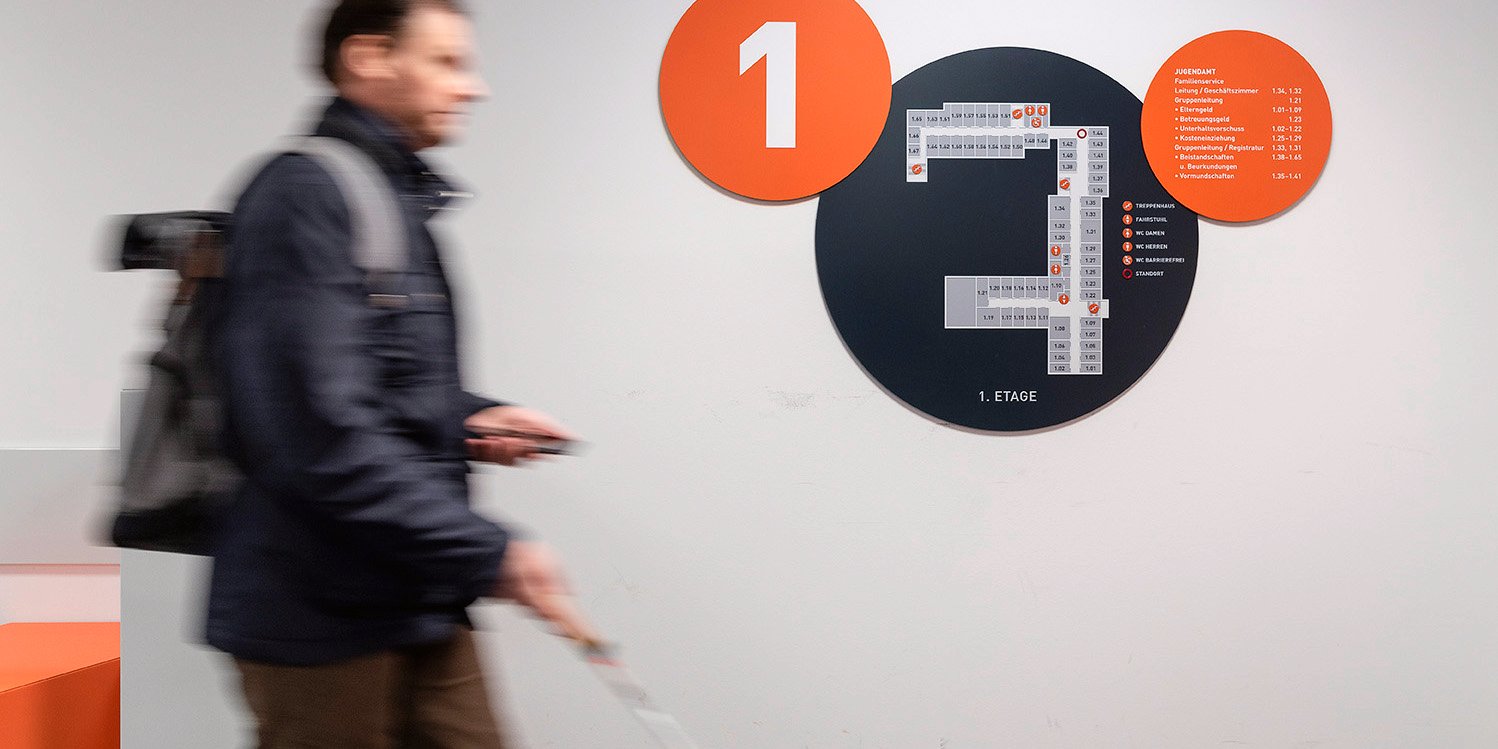 From now on, a digital assistant will accompany customers in the House of Health and Family (“Haus der Familie und Gesundheit”) of the Tempelhof-Schöneberg District Office in Berlin-Mariendorf to the specific room they are looking for. For the first time everGuide, a free indoor navigation system, which is able to guide even blind people safely thanks to its high precision, is being used in a public authority in Germany.

Orientation in an office can be a challenge: many signs, the corridors look almost the same and the office doors as well. Therfore, the Tempelhof-Schöneberg district office is now making the indoor navigation app everGuide available to its visitors free of charge in the Haus der Familie und Gesundheit. everGuide is developed by Fraunhofer FOKUS and supplements the barrier-free, analog guidance system, which includes tactile orientation aids and different colors on each floor of the building, with the digital component of an indoor navigation system. When the visitor enters the recently renovated building, which has been furnished with furniture specially developed for public areas, they first see an overview map of the building on their smartphone and can enter the desired room as the destination. As with the navigation device for the street, the route is displayed and the person is also guided with acoustic announcements. Visitors in wheelchairs can indicate that they want a route without stairs. Visually impaired persons can also use a high-contrast arrow. Blind people can select an acoustic compass. With the acoustic compass, the person does not hear a sound when they are on the right path. If it is wrong, there is a clicking sound, which becomes faster and faster the further you hold the phone in the wrong direction.

Precision is crucial for indoor navigation. If the position is several metres off, the person is walking through the wrong door. To achieve very high accuracy, the Fraunhofer research team uses various data sources simultaneously. Acceleration and rotation rate sensors in smartphones are used to determine the position. They detect the decrease and increase in speed and the change in position of the device. The magnetic field sensor in smartphones is also used. Larger metallic structures, such as radiators and steel beams, locally influence the direction and strength of the magnetic field. These anomalies are used for localization. In addition, signs with a special QR code have been placed in the corridors of the office, which are automatically detected by the smartphone camera and also serve to determine the position. The navigation software on the smartphone merges the different data and adapts the navigation accordingly.

In addition, accurate and up-to-date map material is essential for indoor navigation. For this purpose, the researchers use a robot equipped with cameras and laser scanners (LiDAR). The robot drives through the corridors under remote control and produces a digital map accurate to the centimetre in just a few minutes.

Compared to alternative solutions, everGuide is reliable and at the same time inexpensive to purchase and virtually maintenance-free. The everGuide system works on any modern smartphone without a permanent internet connection. The navigation is calculated locally directly on the smartphone.

everGuide was created by Fraunhofer FOKUS and was further developed in the projects indoorRobot and indoorAssist, among others. The projects have been or are being funded by the German Federal Ministry of Transport and Digital Infrastructure (BMVI) within the framework of the Modernity Fund (“mFUND”) with a total of around 1.1 million euros.

About the mFUND of the BMVI:

Within the framework of the mFUND research initiative, the BMVI has been funding research and development projects relating to data-based digital applications for mobility 4.0 since 2016. In addition to financial support, mFUND supports networking between players from politics, business and research with various event formats and provides access to the mCLOUD data portal.