Also have a look at our program overview. 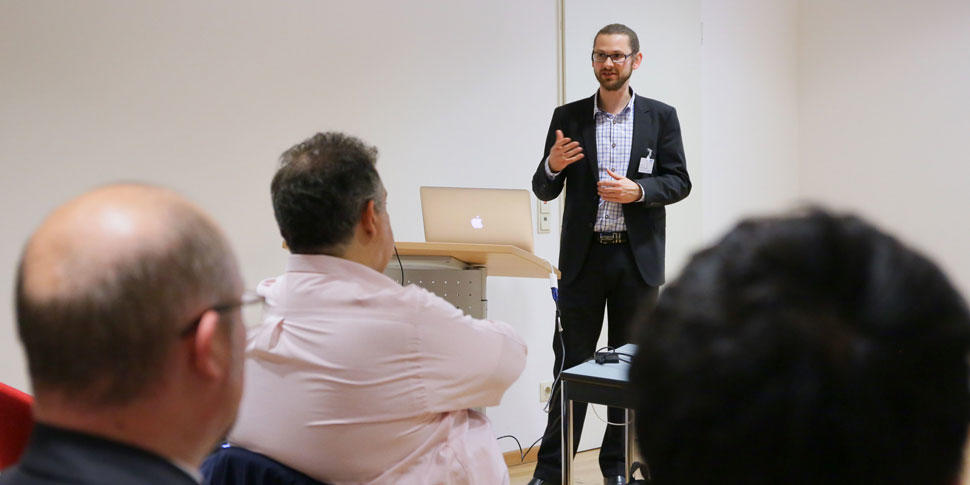 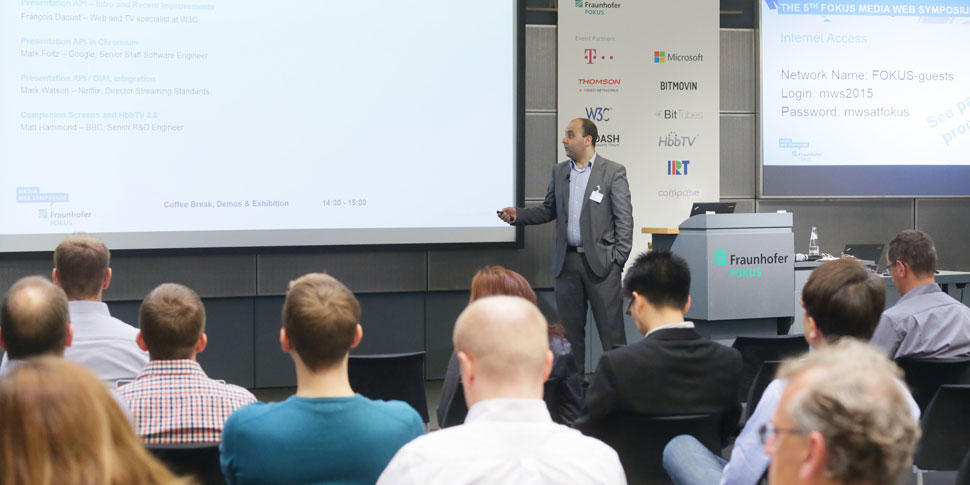 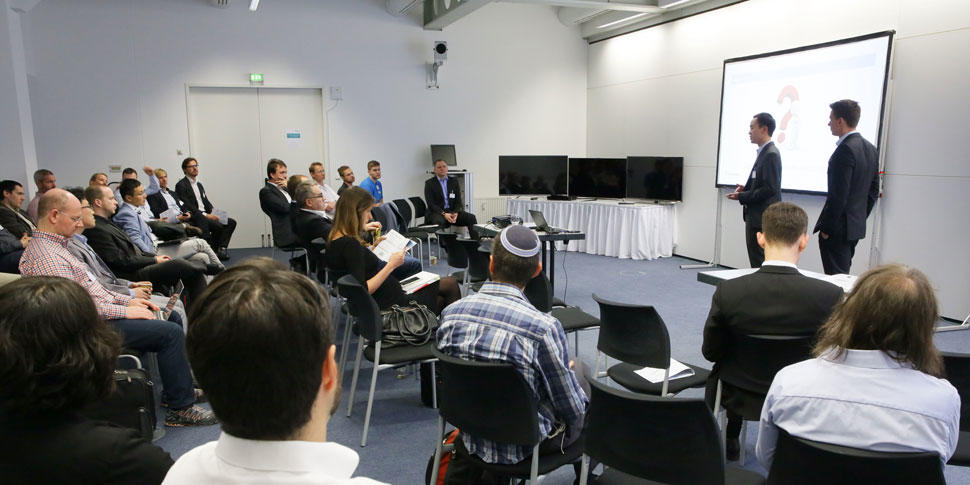 According to BITKOM, various Flat-TV devices were sold in the German market for 4.6 bn Euro in 2014 (Source: GfK, EITO). Together with Set-Top-Boxes and Game Consoles, this value represents more than 50 % of the consumer electronics market and thus, indicates a high interest in moving picture services on the first screen. Moreover, almost everyone (87 %) under 30 is using video streaming services and over 40 % already streams several times a week (Source: Aris, BITKOM).

This booming tendency explains the high interest in hybrid devices, displaying IP-based services on the big screen. The term SmartTV is a made-up word in allusion to the term SmartPhone. It specifies the ability of a TV device to do more complex tasks than originally destined. Today TV sets are called SmartTVs, or Hybrid TVs, when they perform more than just showing broadcasted linear TV or standard teletext. In order to fulfil all requirements for displaying and interacting with web pages on TV screens, The European Telecommunications Standards Institute (ETSI) published a specification in June 2010 – Hybrid Broadcast Broadband Television (HbbTV) defines the technical requirements for the interaction of television and internet and since that time, is extended in different iterations.

This tutorial gives an overview on the current market situation of SmartTVs and HybridTV services in general as well as standardized technologies, such as HbbTV, in particular. It broaches the issue of a fragmented technology stack – both on a platform level (variety of hardware manufacturers and middleware solutions) and on a service level (e.g. different browsers, interpreters and services). In a deep dive session, we introduce the current versions of the standard, from HbbTV 1.0 to HbbTV 2.0, their main differences and characteristics. HbbTV applications may run in different modes: Broadcast independent applications are designed to run in the manufacturer's service portal. In contrast, broadcast related app shall overlay the actual linear TV program. The hybrid standard combines both worlds, broadband and broadcast. Therefore, it re-uses different existing standards of the Open IPTV Forum (OIPF), the Consumer Electronics Association (CEA), the DVB-Project (DVB) and the World Wide Web Consortium (W3C). While Version 1.0 of HbbTV is based on a basic feature set in order to run on TV sets, such as HTML 4, DOM 2 and CSS 2, Adaptive Streaming via MPEG DASH and DRM functions extend Version 1.5. The current Version 2.0 offers a more advanced technology stack: offering primarily HTML 5, DOM 3 and CSS 3. In addition, many other features are leveraging this upcoming standard: e.g. Subtitles via TTML, Companion Screens, Discovery Protocols, Media Synchronization Mechanisms, WebSockets and Advertising approaches using multiple HTML5 media elements.

In a hands-on session, we will introduce a useful app development life cycle using emulators and live test environments consisting of test servers, playout systems and HbbTV compliant TV sets. We will discuss common issues during the development process; give practical recommendations for a broad device support and show examples as well as best practices in a live-programming demonstration.

The majority of our media consumption today occurs in front of a screen like PC, TV, Smartphone or Tablet. Consumers move among screens to get stuff done and learn how they can use multiple devices together either simultaneously or sequentially to achieve a goal. The Multi-screen trend is becoming the norm and will continue to evolve with the introduction of new type of devices like SmartWatches (e.g. Android Wear, AppleWatch), Connected In-Car Infotainments (e.g. Android Auto, CarPlay) and TV Sticks or Boxes (e.g. Chromecast, Fire TV.)

Operators and content providers are increasingly looking for solutions that simplify the technologically complex landscape of Multi-Screen and to reach consumers on all devices they use in their daily life, regardless of the underliying technologies. The development of Multi-Screen applications and services face new challenges such as discovery of devices and services, launch of applications on remote devices, synchronization of application state across devices, as well as time synchronization of multiple media streams and application to application communication. New application development paradigms, concepts, protocols and technologies addressing these challenges are getting mature and will be presented in this tutorial. We will introduce the concepts of Multi-Screen with an overview of application scenarios and brief the participants about technical implications and requirements that each use case implies. Furthermore, we will explain the underlying technical and design challenges for building multi-screen applications. We will also discuss existing technologies and standards that offer solutions for specific challenges we identified.

We will continue the tutorial by presenting technical solutions and protocols such as UPnP and Bonjour for device and service discovery in local networks, DLNA, Miracast and Airplay for media and screen sharing, DIAL for remote application launch, iBeacon and Google's PhysicalWeb for wake-up and local notification, WebSockets and WebRTC for communication between applications and many others. We will also discuss in this part of the tutorial relevant standardization activities in different bodies and organizations such as HbbTV and W3C, especially the Second Screen Presentation API as well as existing and up-coming multi-screen frameworks such as Samsung MultiScreen SDK, LG Connect SDK, AllJoyn framework, Google Cast SDK and Fraunhofer FOKUS FAMIUM Framework. Participants will learn what solutions advantages these technologies bring and which gaps still remain with respect to Multi-Screen application development.

The Internet of Things (IoT) makes many familiar devices in our lives, from light switches and refrigerators to tollbooths and building entry systems, Internet-connected, smartphone-accessible, and responsive. The numbers being forecast for the development of IoT devices are astonishing. Gartner find that the numbers of everyday and enterprise devices that will be connected to the Internet will be huge: 1.9 billion devices today, and 9 billion by 2018, roughly equal to the current number of smartphones, Smart TVs, tablets, wearable computers, and PCs combined. Market analysts predict that this trend will drive trillions in economic value as it permeates consumer and business life. The question arises, how are the “Things" in the IoT actually put together?

Challenges for an open and interoperable IoT

This question manifests itself in a large number of IoT platforms that are built in silos, with a lack of interoperability at gateway, service and application layers. The IoT market is inherently dynamic and new products become available all the time. It is inefficient and time-consuming for developers to support all these products. The number of communication protocols and IoT technologies is steadily increasing, and more and more APIs and data models are released for specific domains and products. For each product, developers have to implement or integrate a specific gateway for interacting with the device and controlling its settings.

Against this background, the IoT landscape can be grouped into a number of fields with specific features and technologies. These fields include micro controller developer boards, Web-enabled IoT devices, IoT platforms and hybrid approaches such as Web of Things (WoT) hubs. Most of these platforms are moving in a Web-centric direction with REST APIs and Web-based dashboards. The Web is becoming an increasingly significant platform for IoT applications. Especially WoT hubs are a growing trend to counteract the fragmentation of technologies and protocols in IoT. WoT hubs abstract form device-specific gateways and technologies, with the purpose to provide a set of Web-based APIs and tools for developing IoT applications efficiently in a fast changing efficient environment. WoT hubs are at the top level of the IoT software stack (gateway, service and application layer). In this fragmented landscape, Web technologies are the most promising approach for interoperability and standards. REST APIs, JSON data models, WebSockets, Publish / Subscribe mechanisms such as XMPP and JavaScript-based Open Source projects for IoT data stream management are tried and proven in production practice.

Web of Things technologies and standards

The tutorial addresses concepts and technologies that are referred to as WoT hubs. With demonstrations and code examples we elaborate aspects of device integration and real-time communication (Web Sockets, MQTT and CoAP based on real-time data stream networks such as MeshBlu, PubNub and servIoTicy), data stream mashups, triggers / actions and finally distributed deployment of these mashups. The special focus of this tutorial is on the composition of data streams from Web services and Web-enabled IoT devices. The Google Physical Web implementation is a promising approach for device discovery. We will demonstrate extensions for WoT device discovery based on BLE and NFC Tags. All these mentioned aspects will presented in depth, based on prototype implementations. These implementations build on a coherent and robust WoT mashup platform covering both delivery and management aspects of device data streams, applications and their integration. Our prototypes introduce real-time communication networks for easy device integration and data stream management.