To stay updated on the latest developments of Megastore and news of Fraunhofer FOKUS FAME, please subscribe to our newsletter.

“Apps” and “app stores” for mobile phones are on everyone’s lips. App stores have revolutionised app deployment and the number of the app stores, apps, downloads, purchases, etc. is continuously growing. App stores, available today, differ in functions and operation concepts, but they all have one thing in common: they are rather closed systems and support a small range of devices only. The Fraunhofer FOKUS MEGASTORE addresses cross-device applications to be used not only on mobiles, but also on desktop computers, set-top-boxes or TV sets. The challenge, which applies equally to users, programmers and providers of an app, is to support as many terminal devices as possible. The user would like to access individual services and contents on all of his devices whereas the provider would like to make the service available with as little operational effort as possible. MEGASTORE facilitates the convenient creation, administration, distribution, and updating of applications for a variety of terminal devices. Thus, the MEGASTORE can be accessed via mobile phones (Android, Windows Mobile, iOS), set-top boxes / TV sets (CE-HTML, HTML5, Mediaroom MPF) as well as mobile and desktop computers (Web browsers, W3C widgets) of different manufacturers in order to use applications, rate and purchase them, as well as to get recommendations.

Besides the support for cross-platform application delivery, MEGASTORE will support a number of innovative features, such as:

MEGASTORE supports a variety of terminals ranging from mobile phones and tablet devices to desktop computers and TV sets. This enables users to execute their apps on the specific device they would like to use the app on in a certain situation. The synchronization of app data allows for seamless switching from one device to another. With future extensions, a single app can also be used across different devices simultaneously in a multi-modal fashion forming a Personal Mobile Cloud (such as playback on a TV, input on a mobile phone). The “Secure WebOS Application Delivery (WAX)” project, which is supported by the European Commission within the framework programme seven and which is coordinated by Fraunhofer FOKUS, will research and develop suitable solutions and concepts for such kinds of extensions.

Fraunhofer FOKUS MEGASTORE is available for joint research projects with an Androidbased mobile terminal client (MWR2010) and with support for CE-HTML, HTML5 and Microsoft Mediaroom terminals. 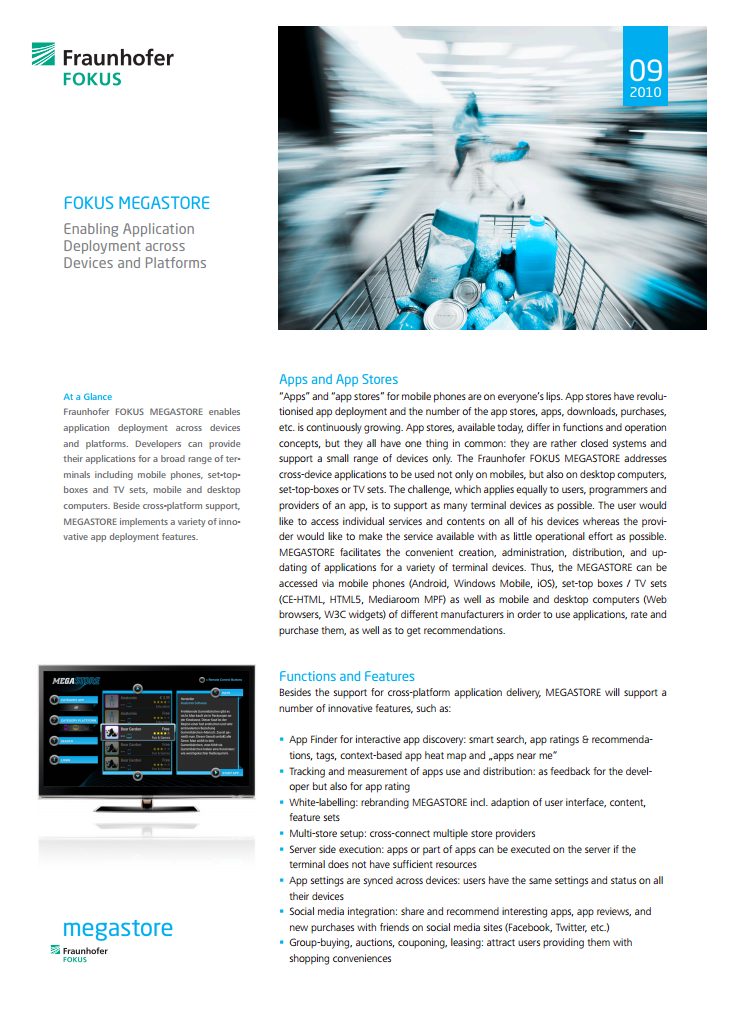