Ultrasonic sound is no longer used just for diagnostics in medicine. Its sound waves can also be used to destroy tumors which would otherwise require surgical intervention. Tumor tissue is heated extremely rapidly to over 60° by bundled ultrasonic beams; in this way it can be progressively destroyed over a number of sessions until it is completely eliminated. During ultrasonic therapy, patients recline in a magnetic resonance tomograph (MRT) which transmits 3D images to the physicians who can see precisely where they should target the beams.

The tricky point is that the patient’s breathing causes the organs in their stomach region to move so there’s a danger of the surrounding healthy tissue being damaged if physicians can’t focus the ultrasound fire point exactly on the affected spot.

In the ESWT (Extra-Corporal Shock Wave Therapy) project, Fraunhofer FIRST is collaborating with a broad range of other Fraunhofer institutes (MEVIS, EMI, ITWM and SCAI) on the development of new technologies to make focused ultrasound therapy safer and more gentle.

FIRST’s role in the project is to develop software that can calibrate organ movements caused by breathing. This involves processing MRT images taken during therapy and real-time analysis of the movements of all relevant body structures. Simulations from this data are then used to pinpoint the respective positions of the tumor, which gives the physicians advance knowledge of when each organ will be in a particular position; this enables them to offset breathing-related body movement during therapy. Beams follow body movements and can even circumvent ”obstacles” like ribs to gain precise sight of the tumor. The project is managed by the Fraunhofer Institute for Medical Image Computing MEVIS and funded by the Fraunhofer-Gesellschaft. 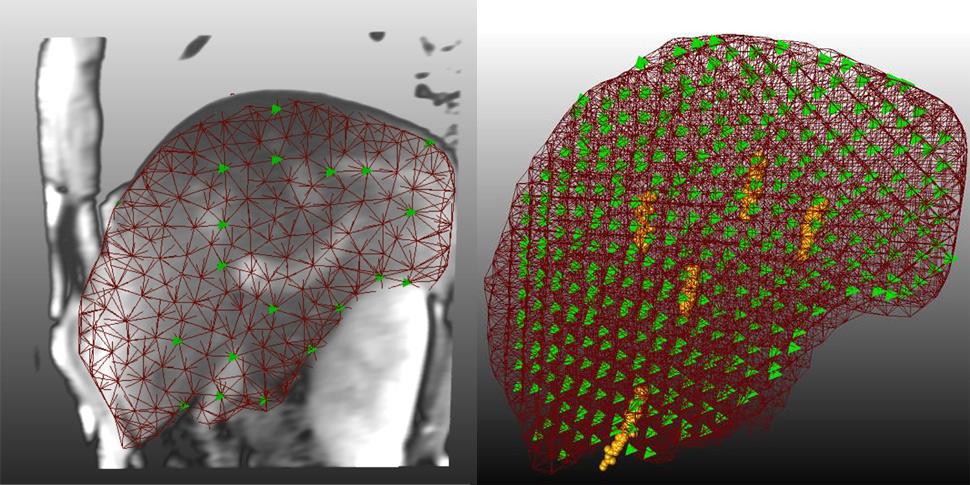