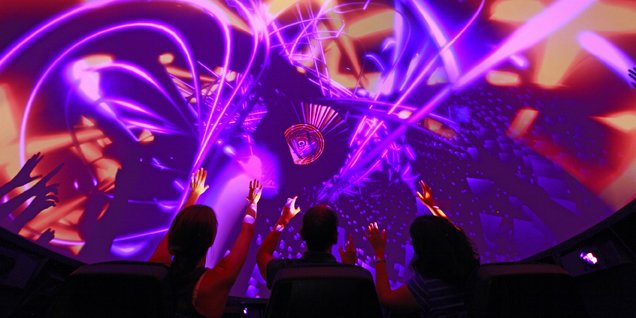 Behind the scenes at the Visual Computing Lab

How to connect images from different projectors to a 360° view? Can this technique also be used for live transmissions? A new video shows the research topics of the Visual Computing Lab at Fraunhofer FOKUS.

Classical cinema, computer games, monitors and smartphones always depict only a limited detail of the world – a sort of tunnel vision. Humans however have a 180° field of vision. Paired with head movements we easily register 360° as a whole.

To use this 360° view for videos, pictures and other applications the Visual Computing Lab of Fraunhofer FOKUS develops various solutions around 360° pictures, -videos, VR and AR. For example the software for autoalignment of multi-projector systems is used in more than 130 installations and projects in 13 countries worldwide.

A new video from researchers at the Visual Computing Lab shows how their solutions for 360° dome projections, applications for Augmented Reality and techniques like soft-edge blending work.