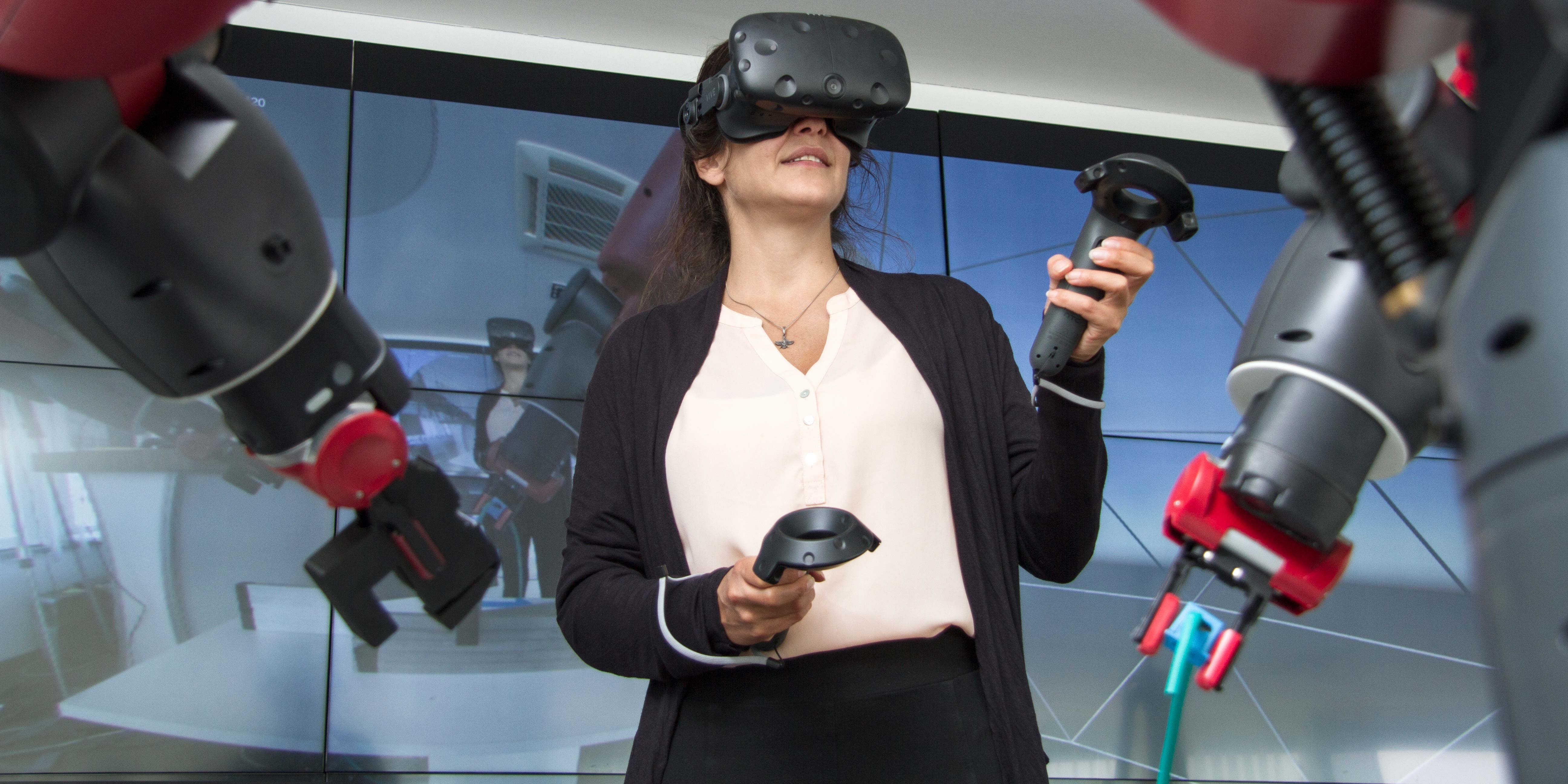 Press Release – At the Hannover Messe from April 1 to 5, Fraunhofer FOKUS and the German Edge Cloud will show a real-time and data sovereign VR control of an industrial robot based on an Edge-based 5G core network in hall 11 booth E06.

3.1 million industrial robots are expected to be in use in factories worldwide next year. Their networking, control and maintenance present the industry with major challenges. Local, private 5G networks in combination with edge computing enable secure, near-real-time communication networks that can be operated and used at the production site. Fraunhofer FOKUS and the German Edge Cloud (GEC) will present an application scenario at the Rittal stand during the Hanover Fair:

Using Virtual Reality (VR) glasses and two VR controllers, visitors can control a two-armed industrial robot connected to an Edge-based 5G core network. The task is to plug an enlarged replica of the Rittal conductor connection terminal onto a rail and insert a cable into the terminal and disconnect it again. An optical and acoustic signal immediately gives the stand visitors feedback as to whether the action was successful.

In order to grip and move objects with robot arms by remote control, people must be able to realistically estimate the depth and distance of objects and the robot arms. FOKUS researchers in the Visual Computing business unit have developed an application that uses two fisheye cameras to stream the robot's 360° x 180° surround video in stereo 3D into the VR glasses. Due to the stereo 3D property of the live video, the viewers can gain a realistic perspective of the robot. The FOKUS team of the Industrial IoT Center has integrated a Robot Operating System (ROS) as communication middleware for the remote control of the robot.

The mobile radio connection is converted via a 60 Ghz frequency with Small Cells, a small radio cell consisting of a base station with a mobile radio antenna. This ensures a smooth VR environment and delay-free remote robot control.

The Open5GCore of Fraunhofer FOKUS' Software-based Networks business unit is used for the network infrastructure. The Open5GCore is one of the world's first standards-based and manufacturer-independent 5G core networks that can currently be used throughout Europe to set up local or regional 5G test networks, such as the Berlin 5G Playground. The software-based implementation allows network functions to be dynamically combined into an individual, virtual special network – depending on the required latency time, security level and number of devices to be networked. In combination with Edge Computing, with which data can be processed directly on the production site in micro data centers, secure, real-time communication is possible.

“Our modular, virtualized core network software allows a flexible combination of network functions for optimized application support on edge clouds, such as the German Edge Cloud. Even during operation, the network functions can be dynamically adapted according to usage behavior. The integration of different access network and backhaul technologies also allows us to adapt to local requirements,” explains Prof. Dr. Manfred Hauswirth, Director of the Fraunhofer Institute FOKUS.

The German Edge Cloud (GEC) works amongst others in cooperation with Rittal, iNNOVO Cloud and the Fraunhofer Gesellschaft. The exhibit shown here is a first showcase of the cooperation between GEC and Fraunhofer.