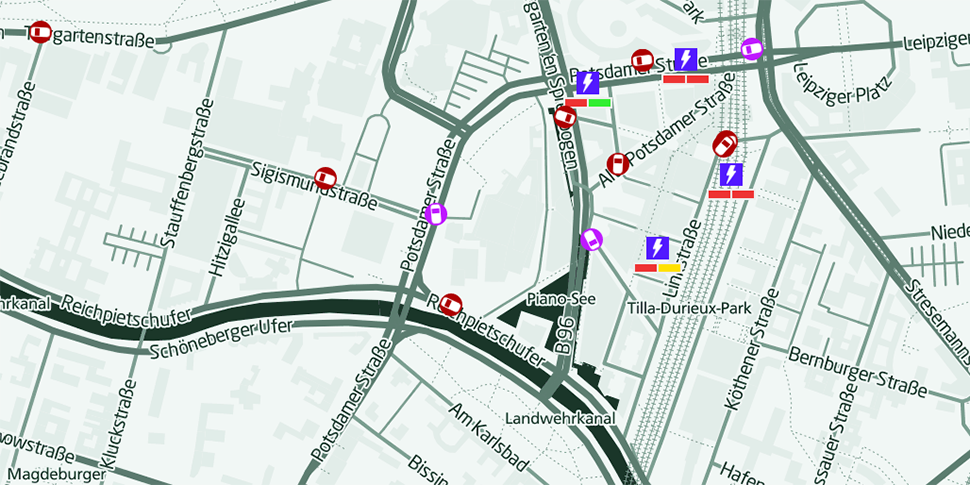 In order to increase the efficiency of electromobility, researchers at Fraunhofer FOKUS developed an application for automated charging station reservation and intelligent charging. Within the framework of the eMERGE project, the app was tested in a large-scale simulation covering the areas of Berlin and Brandenburg.

In the eMERGE project, electromobility was analyzed holistically, considering the interdependencies between vehicles, energy operators, traffic, and the drivers. Between May 2013 and June 2015, private and business customer’s usage of electromobility was studied using 146 Smart fortwo electric drive cars from Berlin, Potsdam and North Rhine-Westphalia.

At the beginning of each journey, test drivers simply pushed a button on the tablet application developed by Fraunhofer FOKUS to allow anonymized collection of driving patterns. Afterwards, the encrypted data was transmitted to the Fraunhofer FOKUS analytics backend and evaluated by an authorized and specially trained eMERGE partner. Departure times and destinations were used to calculate an intelligent charging station reservation and an optimized charging with renewable energy.

In order to test the eMERGE app in a larger scenario and with interconnected vehicles, the competence center ASCT of Fraunhofer FOKUS used data of traffic forecast company PTV AG to create a complex simulation for the use of electromobility in Berlin and Brandenburg in the year 2025. The simulation was accomplished by the simulation environment VSimRTI (V2X Simulation Runtime Infrastructure) developed by ASCT. VSimRTI allows the modeling of interdependencies between vehicles, energy supply, traffic and users. Thereby, the simulation focused on two scenarios: The charging station reservation for car sharing users and the optimized use of wind energy for long distance commuters in Berlin and Brandenburg. The simulation showed that the App significantly simplifies the search for vacant charging stations. On the one hand, the distances travelled for short daily trips were reduced from 28.7 km (17.8 miles, without eMERGE) to 19.7 km (12.2 miles, with eMERGE).

On the other hand, the distances traveled for longer touristic, shopping or exceptions, the trips decreased from 54.4 km (33.8 miles) to 40.7 km (25.3 miles). On an average, drivers using eMERGE cut down their distances traveled by 27 percent. Consequently, driving time and battery power are saved as well. To additionally optimize the use of highly variable wind energy, several charging methods to avoid peak times were developed. The project partners include Daimler AG, RWE Effizienz AG and Technische Universität Berlin. Within the framework of “model region electromobility”, the project was sponsored by the German Federal Ministry of Transport and Digital Infrastructure. By 2020, the German Federal Government aims to bring one million electric cars on the roads and to make Germany the leading market for electromobility. With eMERGE, this purpose becomes more efficient and sustainable.