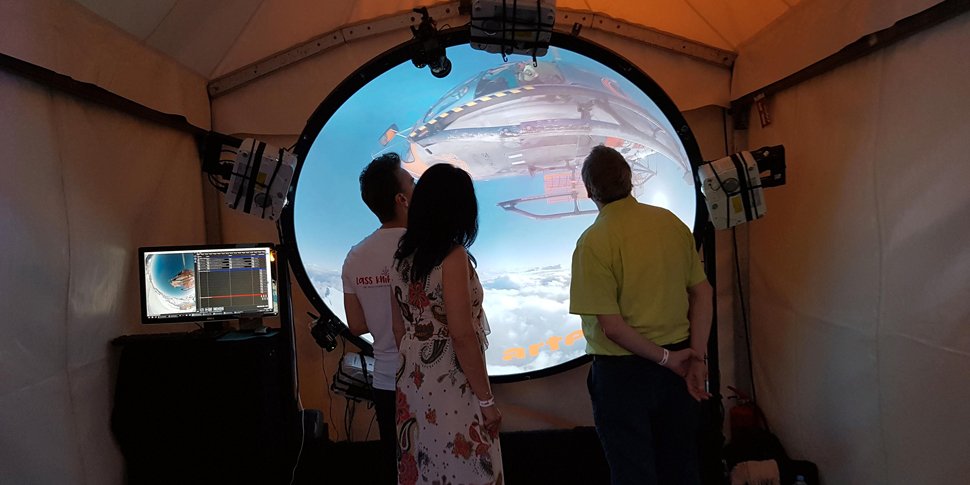 On the 4th of June the Governing Mayor of Berlin Michael Müller, the Berlin Senate and Berlin Partner yet again invited to the annual traditional ”Hoffest” at the Red City Hall. Fraunhofer FOKUS, along with Berlin leuchtet e.V. participated in the festivities and offered its guests an extraordinary 360° film experience.

In cooperation with ARTE 360-degree technologies, visitors were able to join musician Friedrich Liechtenstein at the “Tankstelle des Glücks” (Gas Station of Happiness) or take a helicopter for a spin around the snow-covered Mont Blanc. For this purpose, the films were projected into an overhead dome brought in by experts from the VISCOM business unit of Fraunhofer FOKUS. No VR glasses are required for the immersive 360° film experience, therefore making it possible for visitors to enjoy this special visual experience together in a rather uncomplicated way.

The vertical, transportable dome is part of the Fraunhofer FOKUS Graphic Lab, where innovative visualization technologies and interaction possibilities are tested. A specific calibration software developed by VISCOM is used for the projection in order to display images on curved screens that are pin-sharp and show no falsifications in high resolution. In close cooperation with Carl Zeiss, a media server for the control of multi-projector systems was developed, which guarantees an auto-calibrating projection onto surfaces of any shape. Visitors were able to enjoy the films in a fluid and sharp resolution and got a vivid insight into the future of media technologies.