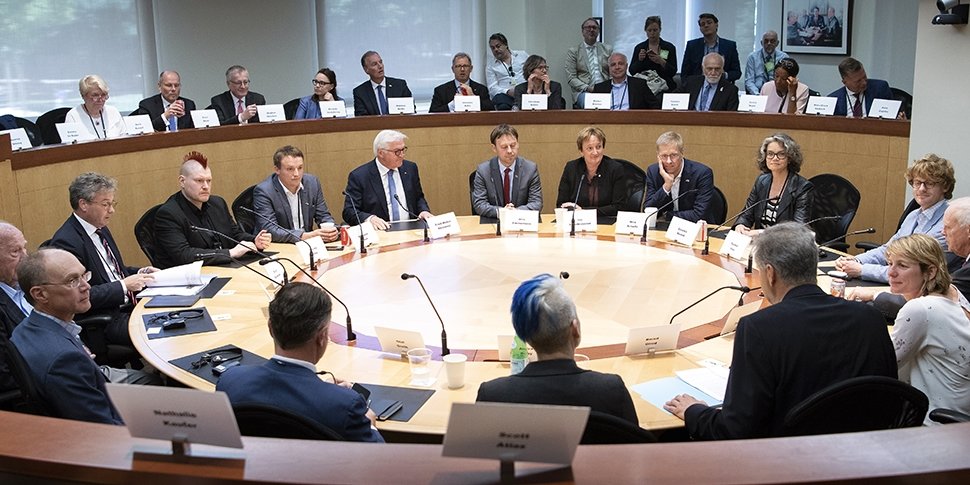 From 17th to 20th June 2018, President Steinmeier traveled to the west coast of the USA. The focus was a transatlantic exchange on the future of democracy in the context of digitalization. A highlight was the inauguration of the Thomas Mann House in Los Angeles. Prof. Dr.-Ing. Ina Schieferdecker, founding director of the Weizenbaum Institute and head of the Fraunhofer FOKUS, took part in the trip as a special guest.

Following extensive renovation work, President Steinmeier inaugurated the Thomas Mann House near Los Angeles on 18 June. It will provide an opportunity for intellectuals and visionaries from various disciplines to exchange views on the future of democracy with each other and with personalities and institutions in the host country. Between 1942 and 1952 Thomas Mann lived with his wife Katia and daughter Erika in the simple Bauhaus-style estate, which was bought by the German government in 2016. The accompanying inaugural conference “Struggle for Democracy” took place the following day in the Getty Museum. One of the first Thomas Mann stipendiaries was Prof. Dr. h.c. Jutta Allmendinger, president of the Social Science Research Center Berlin, who works with Ina Schieferdecker at the Weizenbaum Institute for the Networked Society in Berlin.

Dealing with digitalization also plays a decisive role in the future of democracy. Ina Schieferdecker explains that self-determination will be key in a digitally networked society: “In a broad social discourse, we must agree on how machine intelligence – often called artificial intelligence – should behave, for example, in autonomous vehicles or care robots. In addition, it should be made transparent how the automatisms contained therein function and on which basis they prepare decisions using which data. An international and interdisciplinary scientific exchange is indispensable for this. I am pleased that the Thomas Mann House is promoting transatlantic dialogue on these and other issues of democratic self-determination.”

Another stop in Los Angeles was the L. A. Kretz Center for Innovation. There, the delegation discussed with start-up representatives on the subject of “Women in management positions in the USA”. At Stanford University, the influence of new technologies on people's well-being was discussed. The Center for the Fourth Industrial Revolution in San Francisco hosted an expert discussion on the future of work. Finally, Ina Schieferdecker met representatives of German startups in Palo Alto, in the heart of Silicon Valley.